Gujarat Gram Panchayat Result 2021: over 8,600 gram panchayats in Gujarat to go to Result on December 21, Around 1.82 crore voters are expected to cas

Gujarat Gram Panchayat Result 2021: over 8,600 gram panchayats in Gujarat to go to Result on December 21, Around 1.82 crore voters are expected to cast their votes through ballot papers across around 23,100 polling booths, and the results will be announced on December 21. The elections include general elections, mid-term elections, and by-elections. 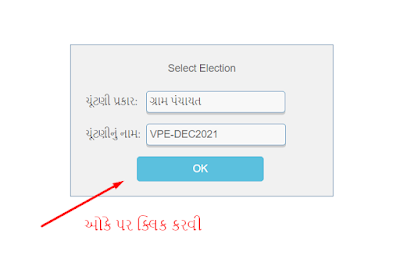 Although, gram panchayat elections are not fought on party symbols, it is considered significant ahead of the next year’s Assembly elections.

Counting of votes in the gram panchayat elections has commenced in various centres in Gujarat on Dec 21.As per a provisional voting figure, the elections witnessed an average voter turnout of 77 per cent. A senior official of the Gujarat State Election Commission said that overall voting has remained peaceful barring a few scattered incidents.

Polls were held on Sunday to 8,686 gram panchayats and 48,573 wards using 37,000 ballot boxes across more than 23,000 booths, with results scheduled to be announced on Tuesday. As per the update uploaded on the website of the state election body on Monday, the sarpanch election recorded a turnout of 77.03 per cent, while that of ward members was 72.92 per cent. A total of over 1.81 crore people were eligible to vote, it said.

Taking forward its continuous efforts of building an active democratic citizenry in the country, Election Commission of India has undertaken a new initiative by designing a Mobile Application for developing a culture of avid electoral engagement and making informed and ethical ballot decisions among citizens of the country. The app aims to provide a single point of service and information delivery to voters across the country. The app provides following facilities to Indian voters:

As many as 1,165 village panchayats and 9,613 wards were declared as “totally uncontested”, where representatives were elected unopposed, as per the Gujarat State Election Commission. Such panchayats are called ‘samras’ in Gujarat. Besides, 473 sarpanchs have been elected in a “partially uncontested” process (where only one candidate for the post of sarpanch was left after the withdrawal of nominations while polls for other seats were being held), it said.

The counting of votes for Gujarat Gram Panchayat elections 2021, which are seen as a litmus test for political parties ahead of the next year’s Assembly elections in the state, will be held today. Polls were held on Sunday to 8,686 gram panchayats and 48,573 wards using 37,000 ballot boxes across more than 23,000 booths in which the average voter turnout was over 77 per cent.

The Gujarat State Election Commission (SEC) on Monday declared elections for 10,879 Gram panchayats, including division elections in villages and by-elections of other gram panchayats. The elections will be held on December 19 and the results will be declared on 21st December 2021.

Amid tight security arrangements and COVID protocols in place, the polling for Gujarat Gram Panchayat elections are currently underway in more than 23,000 booths for elections to 8,690 village panchayats.

A gram panchayat election is fought by a candidate in his/her personal capacity and not on the symbol of any political party. The candidate, however, remains affiliated with one party or another. A total of 27,200 candidates are in the fray for the elections of sarpanch and 1,19,998 for panchayat member.