Chief Minister Rupani has decided to give adequate mass promotion to 9.50 lakh regular students of Std-10 SSC of Gujarat Secondary Education Board this year in this state of Corona with the health protection price to keep the students safe in the current transition of global epidemic corona in the state. . While decision will be taken on 15th for Std. 12 examination. 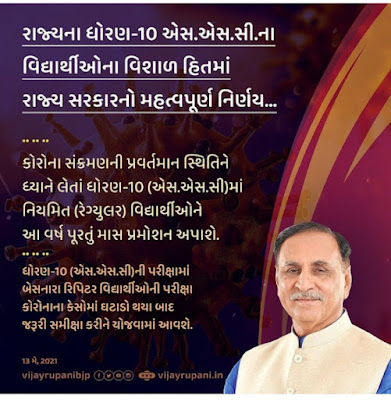 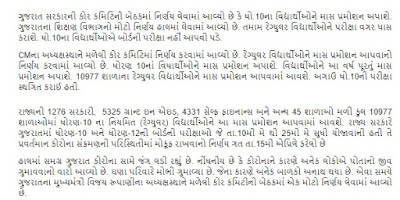 The Chief Minister said that even the vaccination of this class of students has not been carried out at present. The state government has decided to cancel the exam in the wider health interest of the students.

Mass promotion to students of 10,977 schools

Giving details of the decision taken by Chief Minister Vijay Rupani at the core committee meeting, Education Minister Bhupendrasinhji Chudasama said that 1276 government, 5325 grant-in-aid, 4331 self-finance and 45 other schools were found in the state. Will be given. 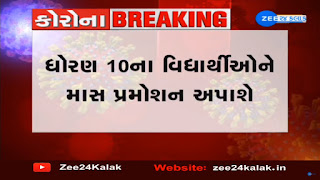 The state government has conducted Std-10 and Std-12 board examinations in Gujarat. The decision to postpone the current Corona transition, which was scheduled to take place from May 10 to May 25, was taken on April 15. When the state government decided to postpone the exam on April 15, it announced that the new exam dates would be announced on May 15 after assessing Coro's transition status and giving students at least 15 days to prepare.

Not only that, the state government has earlier announced mass promotions for students studying in Std 1 to 9 and Std-11 this year, depending on the status of Corona, he added.Decisions taking into account the state of the countrywide transition

The education minister added that the number of coronary cases in the state has been steadily declining over the last two weeks and the number of cases of coronary heart disease patients returning home from hospital has been increasing. However, given the state of transition across the country, the state government under the leadership of Chief Minister Vijay Rupani is determined to protect the future of the students of the state from corona.

Decision to give enough mass promotion this year

Now, Chief Minister Rupani has decided to give adequate mass promotions to regular students of Std-10 SSC this year after a comprehensive review and deliberation on the state of transition of cores in the state at the core committee meeting, Chudasama said.

As a result of this student friendly decision of the state government, regular students of Std. 10 (SSC) will be eligible for the benefit of mass promotion.Subsequent decision regarding repeater examination

The Education Minister said that in the core committee, the Chief Minister has also decided that the examination of repeater students appearing in the standard 10 (SSC) examination will be conducted after necessary reduction in the cases of corona. It is important to point out here that such repeater students have been given the opportunity to appear in Std-10 as regular students in previous years but they could not pass the examination successfully. Source- Divya Bhaskar News